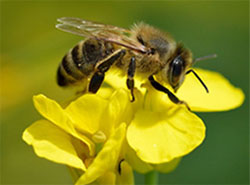 Bees are four-winged insects, usually with a sting. There are over 12,000 species, but only about 600 of them are social in habit. Among the social bees are the honeybee (or hive bee) and the bumblebee.

Bees have been producing honey for at least 150 million years. Bees create honey by repeatedly regurgitating and dehydrating nectar. They use this honey as food stores for the hive during the winter when little or no nectar is available to them.

Most bees are pacific unless you disturb them, but there are also some aggressive species. The weather often affects the temper of bees. On windy and cloudy days, when they are unable to search for nectar and pollen, bees will be more aggressive. Bee stings can be fatal to someone that is allergic to them. 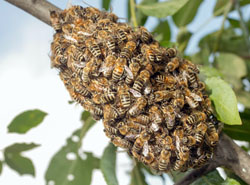 While foraging for nectar and pollen, bees inadvertently transfer pollen from the male to the female components of flowers. This way they help the fertilization of many of our crop-bearing plants.

Most of the bees in the colony are worker bees. Workers are the smallest bees in the colony. They are sexually undeveloped females produced from fertilized eggs. They build and repair the hive, search for nectar and pollen, produce wax and honey, feed the queen and larvae and protect the hive against enemies. The life span of worker bees depend on the time of year. Most worker bees live about 28 to 35 days. However, workers that are reared in September and October, can live through the winter. 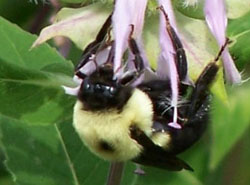 Drones are male bees without stingers. They are developed from unfertilized eggs, produced by the queen by withholding sperm. Their sole purpose is to mate with the queen. They don't collect food or pollen from flowers. If the colony is short on food, drones are often kicked out of the hive. They usually live about 6 months.

The workers select the larvae to be raised as queens. These larvae are larger then the worker larvae, because they are fed food bearing a higher sugar content. The first queen to emerge disposes of the other queens by stinging them. Within days she will fly to where the drones assemble and mate in flight for 1-2 days with up to 17 of them. During the mating she will receive about 90 million sperm cells, which are stored in a special pouch (the spermatheca) and will last her entire life span of about 2-5 years.

About 10 days after mating the queen will start laying eggs. She will lay one egg per minute, day and night for a total of 1,500 eggs per day. Should she stop her egg-laying pace, her workers will move recently laid eggs into queen cells to produce her replacement. 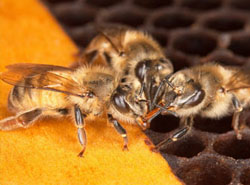 Honeybees fly 55,000 miles and visit 2 million flowers to produce one pound of honey. In one trip, a worker will visit between 50 and 100 flowers. She will return to the hive carrying over half her weight in pollen and nectar. One worker bee will produce about 1/12th of a teaspoon of honey in the course of her lifetime.

A productive hive can make and store up to 2 pounds of honey each day. I takes about 35 pounds of honey to provide enough energy for a small colony to survive the winter. Being able to feed on stored supplies makes it possible for honeybees not to hibernate during the winter, like other bees do. They share their body heat by clustering together in dense packs.

Social bees like honeybees or bumblebees practice mouth-to-mouth transfers, also known as trophallaxis. Adult bees will transfer food to other adults or their larvae. They also transfer chemical substances and hormones, which helps the communication in the colony. 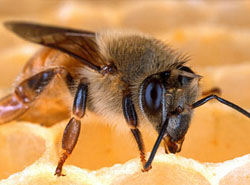 Honeybees communicate with each other through a dance "language". Karl von Frisch received the Nobel Prize in 1973 for deciphering the language, which consists of two basic dances. A dance in a circle for indicating a source of nectar, without giving information about distance or direction. A tail-wagging dance to indicate the exact distance to the nectar source.

Bumblebees live in small nests and therefore never swarm. They are larger and stronger than honeybees and more adapted to fertilize plants in which the pollen and nectar lie deep, as in red clover. They are also able to work in colder weather than the honeybee. 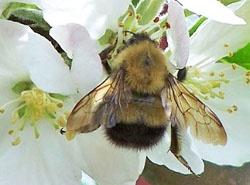 In the spring the bumble queen will begin a new nest with a ball of pollen and wax into which she lays about 6 eggs at a time from which the worker bees will emerge. They will immediately start collecting nectar and the queen will stay in the nest laying more eggs. When the nest has reached the right size (late summer), the queen will lay eggs destined to become drones and next years queen bees. Once hatched the drones will leave the nest and live independent lives. Their only purpose is to mate with the young queens.

Unlike honeybees, the young bumble queens live and work in the colony for the rest of the summer and autumn. As the first frosts begins, the old queen, her workers and the independent drones will die. The newly mated queens will survive in hibernation to begin the cycle again next spring.

Bumblebees don't produce a lot of honey, just enough to feed their young.

Bumblebees are much less aggressive than honeybees. They only attack when they feel their life is under threat. When they sting, they don't lose their stinger and die like honeybees.

One of the only natural enemies of bumblebees are skunks.