There is no single definition of what a sweatshop is. The US Department of Labor defines a sweatshop as a factory that violates two or more labor laws, such as those pertaining to wages and benefits, child labor or working hours. In general, a sweatshop can be described as a workplace where workers are subject to extreme exploitation, including the absence of a living wage or benefits, poor working conditions, and arbitrary discipline, such as verbal and physical abuse. Since sweatshop workers are paid less than their daily expenses, they are never able to save any money to improve their lives. They are trapped in an awful cycle of exploitation.

Defenders of sweatshops often bring up the fact that even though sweatshops are bad, they at least give people jobs they wouldn't have had otherwise. However, the type of jobs sweatshop workers receive are so bad that they rarely improve their economic situation. 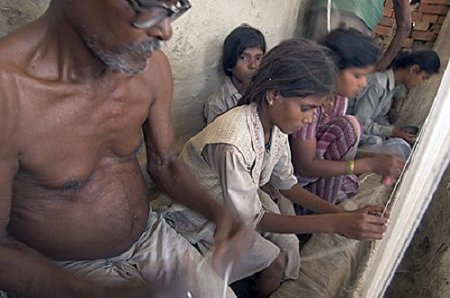 Carpet weavers like this family are usually Dalits or "Untouchables," the lowest caste in South Asian society. In many instances, the children are helping a family member, or someone else in their village who has fallen into debt. An offer is made to place a loom in their hut so they can pay off their debt, but this only ensures their enslavement, sometimes for generations.

The International Labor Organization (ILO) has estimated that 250 million children between the ages of five and fourteen work in developing countries. 61% in Asia, 32% in Africa and 7% in Latin America. Many of these children are forced to work. They are denied an education and a normal childhood. Some are confined and beaten. Some are denied the right to leave the workplace and go home to their families. Some are even abducted and forced to work.

Children like this young girl are prized in the carpet industry for their small, fast fingers. Defenseless, they do what they're told, toiling in cramped, dark, airless village huts from sunrise until well into the night.

Which products are made in sweatshops?

All kinds of products can be made in sweatshops. Some of the biggest problem industries are:

Young men sew beads and sequins in intricate patterns onto saris and shawls at a "zari" workshop in Mumbai, India. The boys, who arrive by train from impoverished villages across India, often work from six in the morning until two in the morning the next day. Some sleep on the floor of the workshop. If they make the smallest mistake, they might be beaten. All say they work to send money back to their families, but some employers are known to withhold their meager pay.

What do workers want?

Workers need to be paid a living wage, enough to meet their basic needs and to enable them to plan a better future. They need to be educated about their rights, including local labor laws. They also need the opportunity to achieve an education for themselves and their children. And workers need to be able to freely associate and advocate for rights and improvements to their working conditions, pay and benefits without fear of reprisal. Outside of the factories, they should have the right to form cooperatives or worker-owned enterprises in their communities.

Most factories are monitored by inspectors who are paid by the industry. Often, they'll call ahead to arrange a visit. This will give the factory management time to make the place look nice, get rid of the child workers and coach the workers about what to say.

How can we end sweatshops?

There needs to be full public disclosure. Companies must disclose the treatment and pay of workers and how and where products were made. This disclosure needs to be backed with independent monitoring of working conditions and pay. Violations that are discovered must be corrected in a way that protects workers and their jobs. This includes paying for education for child workers found in factories and paying parents a living wage.